The Divine Service, Part 3: The Lection and Sermon

Upon uttering our unified “Amen” to the Collect of the Day, the Divine Service transitions from prayer and praise to the hearing of God’s Word. His Word, as Scripture declares, powerfully conveys God’s grace as it creates and strengthens faith. Paul writes, “faith comes from hearing, and hearing through the word of Christ” (Romans 10:17).

The Divine Service, which announces the giving of God’s grace in the Introit and prays for it in the Collect, now moves to the conveying of His grace through the reading and proclaiming of the Word. This is the high point of the Service of the Word, for as Jesus promises, He is present where believers gather in His Name. 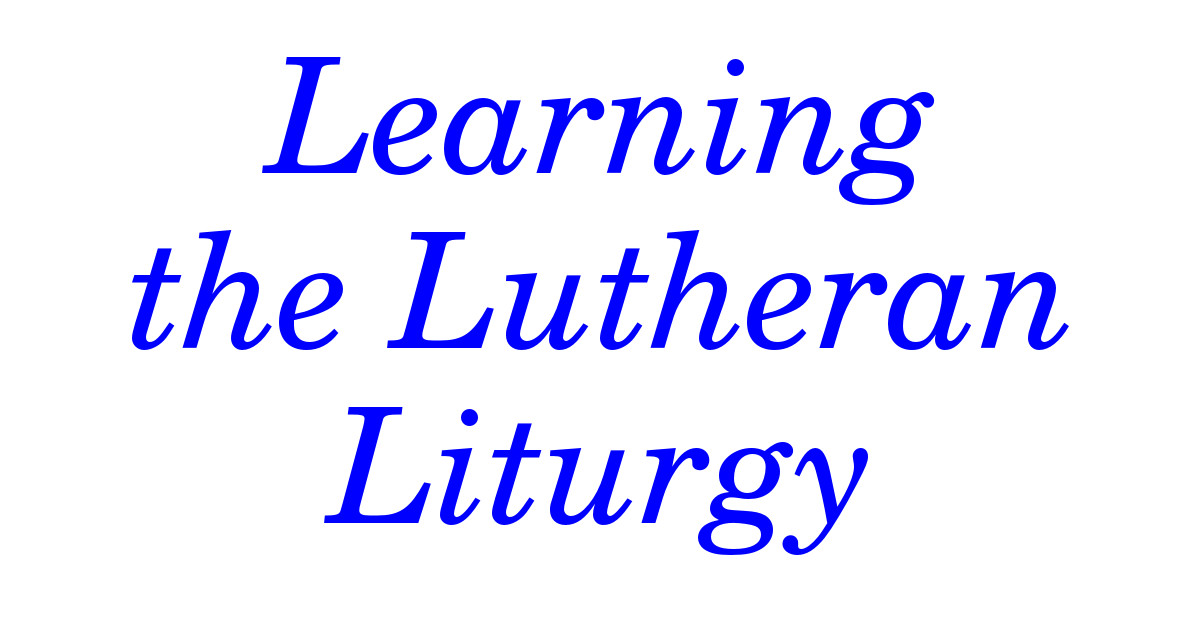 The Divine Service follows an ascending order of Biblical readings:

We acknowledge the great value of His words by standing and calling out our Alleluias when the Gospel is read.

Church historian Luther Reed called the Gospel “the liturgical summit of the first half of the Service.” Expanding on this thought he wrote (The Lutheran Liturgy, 281):

The four Gospels … have always stood apart from the rest of Holy Scripture as giving a clear and living picture of the divine Person of our Lord. These inspired records of eye-witnesses, convincing in their simplicity, sincerity, and power, reveal to us the Christ of God in the lowliness of His humanity and the majesty of His divinity. They tell us the incidents of His daily life. They record His actions, conversations, and teaching. They lead us through the unfolding drama of His suffering, death, and resurrection to the sure foundations upon which the Christian Church is built—the message of salvation, the commissioning of the Apostles, and the institution of Sacraments.

In order to ensure the consistent retelling of this Divine drama, the Lutheran Church has preserved the historic lectionary. Instead of progressing through each book in its entirety with sequential readings (which we tend to reserve for Bible studies), we (re)trace the grand salvation story. So, instead of beginning at Genesis 1 or Matthew 1 and reading each book chapter by chapter, our readings match the given theme for each Sunday.

This system of assigned readings developed over time as the church increasingly structured its life around Christ’s. In broad strokes the Church year is divided into three “times”: Christmas, Easter, and the Church. These “times” are subdivided into seasons such as Advent, Christmas, Epiphany, Lent, Easter, and Pentecost. The readings are built around these events.

By structuring its lectionary around the life of Christ and His Church, the Lutheran Church seeks to facilitate the proclamation of Christ, which Jesus indicates is the point of Scripture (Luke 24). In the Time of Christmas we hear the beginning of Jesus’ story, how Jesus was born of the Virgin Mary. We also zero in on the identity of Jesus. In the Time of Easter we hear the story of Christ’s cross and resurrection. In the Time of the Church we hear how the Holy Spirit welcomes us into Jesus story through God’s Word and the Sacraments. Through the regular and repeated readings of the historic lectionary we encounter Christ even as we rehearse the drama of His salvation story. It’s no wonder we conclude our readings by saying, “This is the Word of the Lord. Thanks be to God.”

In 2 Timothy 2:15, St. Paul encourages pastor Timothy: “Do your best to present yourself to God as one approved, a worker who has no need to be ashamed, rightly handling the word of truth.” Luther and the Reformers saw Paul’s words as incredibly significant. Luther explains, “God has given us His Word in these two forms: the Law and the Gospel. The one is from Him as well as the other; and to both He has attached a distinct order: the Law is to require of every one perfect righteousness; the Gospel is to present gratis the righteousness demanded by the Law to those who have it not (that is, to all men).” Referencing this verse, the Lutheran Confessions say, “We believe, teach, and confess that the distinction between law and gospel is to be preserved with great diligence in the church as an especially glorious light, through which the Word of God, in accord with Paul’s admonition, is properly divided.”

For Luther and the Reformers these realities had great implications for the sermon. Instead of an explanation of God and His activities or a moralistic “Try harder” speech, the sermon presented Christ the crucified and risen Savior to sinners. In order to do this, though, sinners had to be made aware of their sin. As. C.F.W. Walther, the first president of the Lutheran Church Missouri Synod and author of Law and Gospel, explains, “As long as a person has not been reduced to the state of a poor, lost, and condemned sinner, he has no serious interest in the Savior of sinners” (249). Later he adds, “without a real knowledge of what an awful thing sin is man cannot understand and accept the Gospel. As long as he is not alarmed over sin as his greatest enemy and the most awful abomination indwelling him, he will not come to Christ” (325).

But man fails to see the severity of his sin. Walther puts it candidly, “Man is by nature a conceited being. He says: ‘What wrong have I done? I have committed neither manslaughter, nor adultery, nor fornication, nor larceny.’ Wrapped in these miserable rags of his civil righteousness he purposes to make his stand before God. That spirit or pride in himself must be cast out. That requires an application of the hammer of the Law which will crush his stony heart” (97). Sinners who are not crushed by the hammer of God’s Law foolishly consider themselves secure before God. They neither fear His eternal, righteous wrath nor tremble in the face of His holiness.

We will not be moved to repentance and desire the forgiving grace of the Gospel until God’s Law has done its work and revealed the true gravity of our spiritual sickness. Only then are we ready to receive the healing balm of the Gospel. As Walther explains, “The ultimate aim in our preaching of the Law must be to preach the Gospel” (404). In Luther’s words (LW 26:335):

The function of the law is only to kill, yet in such a way that God may be able to make alive. Thus the law was not given merely for the sake of death, but because man is proud and supposes that he is wise, righteous, and holy, therefore it is necessary that he be humbled by the law, in order that this beast, the presumption of righteousness, may be killed, since man cannot live unless it is killed.

When our hard hearts have been broken by God’s Law, we are ready to receive God’s Gospel in Christ. As Walther defines the Gospel, “the Gospel is … nothing else than a preaching of consolation and a joyful message, which does not reprove or terrify, but comforts consciences against the terrors of the Law, points alone to the merit of Christ, and raises them up again by the lovely preaching of the grace and favor of God, obtained through Christ’s merit” (283). This is the task of the preacher and the goal of the sermon. It is, quite simply, the most important words he speaks in a week. For this reason, he and his congregation are in prayer throughout the week asking God to guide his preparation and proclamation.