The world has taught us to say, “There’s never enough time in the day to accomplish everything I need to do.” Have you ever felt that way? Have you ever realized that it is a grave sin to think such a thought?

A sin? Well, yes. After all, God is an abundant giver. He gives us time. He also gives us work to do. If we conclude that the first gift does not suffice for the second gift, then we are accusing God of failing to provide for our needs. To say to God, “there’s never enough time in the day to accomplish everything I need to do,” denies the doctrine of providence, namely, that God “richly and daily provides me with … all that I need to support this body and life” (Small Catechism, First Article).

If you have been trapped in this sin of doubting that God has included enough hours in the day, you are not alone. Who in today’s hustle-bustle world of stress at work, of racing against the clock even at home, can claim immunity from this plague of chronic burnout? Despite all of the time-saving devices peddled in the marketplace, it seems life becomes busier every day. The very word “stress” acquired its contemporary meaning in the 1970s, a decade of stagnant wages and runaway inflation when women entered the workplace in great numbers, working longer hours away from home than ever before. Ever since then, American families have considered themselves chronically too busy. Today, half of the national population is too young to remember any other lifestyle.

God, however, has a different plan. He desires to set us free from the agonizing experience created by Satan’s lie that there is never enough time in the day. God literally made time for us. 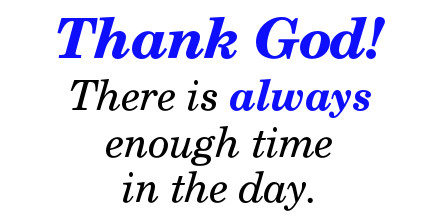 “In the beginning”—the beginning of time itself, when eternity transitioned into temporality—“God created the heavens and the earth” (Genesis 1:1). As the creation narrative continues, Moses makes clear that God arranged the world with order and purpose. He created a beautiful garden and two gardeners, Adam and Eve, to care for it. God also created “two great lights: the greater light to rule the day, and the lesser light to rule the night. He made the stars also” (v. 16). Why? These celestial bodies would “divide the day from the night; and … be for signs and seasons, and for days and years” (v. 14).

While the sun governs both the day and the year, and the moon measures the month, the stars mark the seasons of the year. The brightest star in the night sky, Sirius, indicated the “dog days of summer” in ancient Egypt, a time named for the star’s constellation, Canis Major, or Big Dog. The Egyptians could time the flooding of the Nile by celestial patterns such as this. The position of the Pleiades, a cluster of seven bright stars in the constellation of Taurus, indicated when it was safe to sail on the Mediterranean Sea. (Recall that Paul warned the crew escorting him to Rome that the stormy season was at hand and sailing no longer was advisable, Acts 27:9.) False religions also arose, as people worshiped the stars rather than recognized them as gifts from the one true God. Today, people are hardly different, as we bow in obedience to our clocks and calendars and smart-phone reminders of to-do lists that hasten us 24/7, dictating our every move in the religion called “being stressed out.”

God has to-do lists and schedules, too, but for a blessing and a comfort. He appointed the 14th day of Nisan, the first month of spring in the Jewish calendar, for the celebration of the annual Passover. The next seven days constituted the Feast of Unleavened Bread. Together these holy days—or holidays—served to remind God’s people that He had delivered them from bondage in Egypt, as well as to guide their thoughts forward in time to the coming Messiah, who would be the Lamb of God.

Leviticus 23 records several other “appointed times” as well: the Feast of the First Fruits, the Feast of Weeks, the Feast of Trumpets, the Day of Atonement, the Feast of Tabernacles, and of course the weekly sabbath. The positions of the sun, moon, and stars indicated the proper timing for each festival, and the festivals themselves prompted God’s people to meditate on His great love for them, as He revealed His plan of salvation.

God Accomplishes His Plan of Salvation on Schedule

God’s salvation schedule continued from the Old into the New Testament. As St. Paul wrote to the Galatians, “When the fullness of the time had come, God sent forth His Son, born of a woman, born under the law, to redeem those who were under the law, that we might receive the adoption as sons” (Galatians 4:4–4). Jesus Himself slowed down those who were rushing Him, insisting, “My hour has not yet come” (John 2:4), “My time has not yet fully come” (John 7:8), etc. God’s plan came to fruition right on schedule, not a minute too late or a minute too early. And people knew it. The Pharisees in Jerusalem seem to have understood that Daniel’s prophetic countdown to the promised Messiah was approaching zero (Daniel 9:24–27), so they inquired whether John the Baptist was the One (John 1:19–28). They were mistaken, but imagine Mary’s surprise when the angel Gabriel—the same messenger who had announced the countdown to Daniel—appeared to her, identifying the Child that she would conceive as the Messiah (Luke 1:26–33)!

God’s amazing timeline of salvation also continues to the present day. When were you baptized? Whom has God placed in your life right now to serve as your pastor? Whom has He entrusted to your own spiritual care today? The next great event will be Christ’s return. Until then, we live in His “time of grace”—coming to faith, growing in faith, and sharing our faith with others. This is His time for us. Remember, God literally created time for you.

God Works through His Children to Redeem Time

In Ephesians 2:8, we learn, “For by grace you have been saved through faith, and that not of yourselves; it is the gift of God, not of works, lest anyone should boast.” God loves us unconditionally. He forgives us for our misuse of His time. He makes us new in Christ. God’s schedule always includes us. “For we are His workmanship, created in Christ Jesus for good works, which God prepared beforehand that we should walk in them” (v. 10). God has given each of us 24 hours in every day, to use according to His plan for our lives. As His redeemed children, we now participate with Him in redeeming time itself—in taking back from Satan what God has created to be for us, for our good, and for His kingdom.

“See then that you walk circumspectly,” St. Paul admonishes, “not as fools but as wise, redeeming the time, because the days are evil” (Ephesians 4:15–16). Schedule-burdening temptations draw us away from the things of God—from the divine service, from home devotions, from being patient with our spouse, from listening to our children, from serving faithfully in the workplace, from pausing to console a grieving friend—from fulfilling our vocation. God overcomes those temptations for us. He blesses us by giving us enough time to accomplish what He knows is best for us and for those whom we serve, while also guiding us to prune from our schedules those tasks that He has not appointed for us to do.

His plan is not shortsighted, but includes the testimony that laypeople, in their mundane vocations, share with the unbelievers for the sake of bringing them, too, into His eternal kingdom. “Walk in wisdom toward those who are outside,” writes St. Paul, “redeeming the time. Let your speech always be with grace, seasoned with salt, that you may know how you ought to answer each one” (Colossianas 4:5–6).

In the end, it is not a matter of us working efficiently enough to accomplish everything we must do. Rather, it is a matter of trusting that when the world tells us there is not enough time, God will nevertheless provide more than enough time. Remember, “vocation” does not principally mean us working for God, or even us working with God, but God working in us and through us to bless us and to bless those in our midst. Certainly God has enough time for that.

God Has Given Us This Day Our Daily Bread, and Time!

It is God’s very character never to run out of what is necessary. When a widow feared she and her son would starve to death, the Prophet Elijah assured her that God would provide her with daily bread. “The bin of flour was not used up, nor did the jar of oil run dry, according to the word of the Lord which He spoke by Elijah” (1 Kings 17:16). When Jesus was born, there was no room in the inn, but plenty of room in the manger (Luke 2:7). If we see scarcity, we are looking in the wrong place. God had not planned that His Son would be born in the inn. The Lord is not a false god of scarcity, but the true God of abundance. Five loaves and two small fish were not insufficient, but excessively sufficient to feed 5,000 men, plus women, plus children, plus twelve baskets of leftovers (Matthew 14:13–21).

And yet, this immeasurable God fits into our tiny world. The Son of God, though infinitely God, lay in the finite manger without difficulty. Just as bread and wine are not too small for the Body and Blood to somehow become present “in, with, and under” those earthly elements, so also the manger could contain God Himself, born in the flesh. If this all holds true, then why doubt that God can accomplish great things through our earthly vocations within the 24 hours that each day holds for us? To observe God’s priorities in your own life, try “My Vocation in Christ: Priorities for Redeeming the Time.”

Now to Him who is able to do exceedingly abundantly above all that we ask or think, according to the power that works in us, to Him be glory in the church by Christ Jesus to all generations, forever and ever. Amen.