The Doctrine of Vocation: Sacramental Blessing, Not Sacrificial Duty

“Your vocation,” I tell my students at Bethany Lutheran College, “is how your station in life serves as a channel of God’s blessings to the people around you.” 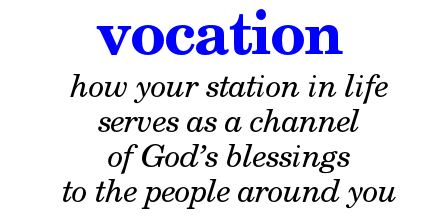 Unfortunately, common misperceptions about the doctrine of vocation leave people feeling either left out (as if only a clergyman has a “vocation,” or calling, from God) or else burdened (as if “vocation” means a never-ending checklist of tasks to complete). But properly understood, “vocation” involves everyone while burdening no one.

Vocation: Everyone Has One (or Many!)

On the eve of the Reformation, the Latin term vocatio (literally, “a calling”) typically referred to the divine calling of a priest, a monk, or a nun. Laypeople did not have vocationes. Martin Luther, however, suggested otherwise. In emphasizing the “priesthood of all believers” (cf. 1 Peter 2:9), he identified callings that all people—lay or clergy, young or old, male or female—receive from God. Yes, a pastor does a holy work when preaching God’s Word to the congregation. But, also yes, a mother does a good and holy work when nursing her infant.

When visiting the Saxon congregations, Luther realized that many people hardly knew the first thing about Christian doctrine. Even more disturbing, he discovered that many priests were themselves ignorant of the chief parts of the faith: the Ten Commandments, the Apostles Creed, the Lord’s Prayer, and so forth. (At the time, the priest conducted the liturgy in Latin, of which the people knew nothing and even many of the priests knew barely enough to pronounce the words.) To promote a better understanding of God’s Word, Luther wrote his Small Catechism (1529)—in German!—as a teaching guide for pastors and parents to use with children. Meanwhile, he preached a series of sermons that became his Large Catechism, essentially a continuing education curriculum for adults. Both books applied the doctrine of vocation to their readers.

The Small Catechism included a “Table of Duties,” introduced as “certain passages of Scripture for various holy orders and positions, by which these people are to be admonished, as a special lesson, about their office and service.” From 1 Timothy 3:2–4,6 and Titus 1:9, Luther identified the responsibilities of “bishops, pastors, and preachers.” From 1 Corinthians 9:14, Galatians 6:6, 1 Timothy 5:17–18, and Hebrews 13:17, he indicated “what hearers owe to their pastors.” Other sections summarized the vocations of civil magistrates, citizens, husbands, wives, parents, children, laborers, masters, young people, and widows. The list concluded with the commands applicable to people in every walk of life: “love your neighbor as yourself” (Romans 13:9), plus an exhortation to pray for one another (from 1 Timothy 2:1).

In the Large Catechism, Luther applied each of the Ten Commands specifically to people’s vocations. For example, he defined stealing as “nothing else than to get possession of another’s property wrongfully,” and then he explained that this commandment not only points to the sin of highway robbery but also to laborers who are lazy, or shopkeepers who overcharge, or any other form of swindling to which a person may be tempted within his or her vocation. Concerning the commandment that forbids bearing false testimony, Luther explained that judges, witnesses, and common people have distinct vocations. “No one is allowed publicly to judge and reprove his neighbor—even though he may see him sin—unless he has a command to judge and to reprove.” A witness called into court keeps this commandment by speaking the truth and avoiding lies. A common person, not called into court, who observed the sin of his neighbor, keeps this commandment by remaining silent or else privately correcting his neighbor one-on-one (unless, of course, the sin is of such a public and harmful nature that it must be reported—but then to the authorities, not to fellow gossipers). Here Luther noted that people in different vocations obey the same commandment differently: some by speaking, some by remaining silent, and so forth.

By viewing the Ten Commandments through the lens of “vocation,” Luther revealed the hypocrisy of many in the church who were teaching that a mere outward observance of the literal commandment would suffice to please God. “Thou shalt not murder,” says the commandment. Most people have never killed anyone. Therefore, they must be innocent of this commandment. Scripture, however, teaches that this commandment has a broader meaning: “Whoever hates his brother is a murderer, and you know that no murderer has eternal life abiding in him” (1 John 3:15). The doctrine of vocation emphasizes who one’s “neighbor” is: for a business owner, it is his customers; for a mother, it is her children; for a civil ruler, it is his subjects. All people are called to love their neighbors within their respective vocations.

To stop here, however, would reduce “vocation” to a specific application of the Law, which was not Luther’s only intention (although it was one of his intentions). True, a contemplation of the Ten Commandments with respect to one’s vocation will reveal one’s sin—and one’s need for the Savior, Jesus Christ. In that sense, pondering one’s vocation does help to prepare oneself for Confession and Absolution. As Luther wrote in the Small Catechism: “Consider your own station according to the Ten Commandments, whether you are a father, mother, son, daughter, employee; whether you have been disobedient, dishonest, lazy; whether you have injured anyone by word or deed; whether you have stolen, neglected, wasted anything, or done any harm.” Confess your sins. Receive the comforting words of Absolution: your sins are forgiven in the name of Jesus! And yet, as useful as “vocation” might be for Confession and Absolution, Luther also had in mind something more.

Vocation: A Sacramental Blessing, Not a Sacrificial Duty

A person’s vocation is not so much about what he or she does, but rather about what God does through that person’s station in life. When God called Abram, he promised (Genesis 12:2–3):

I will bless you
And make your name great;
And you shall be a blessing.
I will bless those who bless you,
And I will curse him who curses you;
And in you all the families of the earth shall be blessed.

In summary, Abram was blessed to be a blessing. God called Abram into the vocation of patriarch, through which God would bestow further blessings upon the people entrusted to Abram’s care: in this case, future generations in the Messianic lineage and, indeed, the entire population (“all the families of the earth”). Subsequent chapters in the Book of Genesis reveal that Abram did not live up to God’s expectations. He deceived the Egyptians about his relationship to his wife. Later Abram repeated the same deception upon Abimelech. The couple also schemed an adulterous method for obtaining offspring. Nevertheless, God continued to work through Abram—renaming him Abraham, “father of many,” and in time accomplishing the salvation of the world through his “promised seed,” Jesus Christ.

How could all this happen through one elderly nomad who at times stumbled into gross sin? It was not Abraham who made his vocation a success, but God.

Similarly, one may ask regarding Baptism, “How can water do such great things, as bringing a person to faith and distributing the forgiveness of sins, life, and salvation?” Luther answers this question in his Small Catechism by emphasizing that “it is not the water that does these things, but the Word of God which is in and with the water.” Or, as St. Augustine explained, “Verbum accedat ad elementum et sit sacramentum. The Word comes to the element, and it becomes a sacrament.”

As Luther explained in his Large Catechism, children are to honor their father and mother “not because of the worthiness of parents, but because this work is included in, and controlled by, the jewel and sanctuary, namely, the Word and commandment of God.” Parents may be “lowly, poor, frail, and strange,” Luther readily admits. Nevertheless, “we are not to consider who they are or how they may be, but the will of God, who has created and ordained parenthood.” Moreover, the motivation of children to give honor to their parents comes not merely from God’s command but also from His promise: “that it may be well with you and you may live long upon the earth.” Just as God has attached His spiritual promises of forgiveness and salvation to the water that is used according to His Word in Holy Baptism, so also God has attached to the Fourth Commandment an earthly promise. God intends to bless children through their parents, and those children who honor their parents will receive this blessing more richly than those who do not.

The same holds true for all vocations. When God calls a person to a particular station in life, He does so with the intention, and with the follow-through, of distributing His blessings through that person’s life to the lives of others in that person’s midst. Vocation, therefore, is far more than a checklist of things that the butcher, the baker, and the candlestick maker do; vocation means God Himself works to provide daily bread through means of one person for the benefit of another person. As Gene Edward Veith, Jr., has emphasized in his book God at Work: Your Christian Vocation in All of Life, “instead of seeing vocation as a matter of what we should do—what we must do as a Christian worker or a Christian citizen or a Christian parent—Luther emphasizes what God does in and through our vocations.”

Ultimately, vocation points not to a “sacrificial” duty that burdens a person’s conscience with a checklist of divine expectations, but rather to a “sacramental” blessing analogous to God’s manner of working through Baptism and the Lord’s Supper. So, the next time you recognize that God has called you to do something (changing a dirty diaper at 2 a.m., reporting to work at 8 a.m. every Monday morning, answering the phone to comfort a distraught friend, or … ), smile and relax as you marvel at God’s activity within your station in life that serves as a channel of His blessings to the people around you.

Color the Liturgy, produced by According to Your Word