A Home Is a Christian Home by Grace

Making a home a Christian home is messy business. How can we make our home a Christian home when there are tempers, favoritism, and pride? Our attempts at it are rather comical if you think about it: sinners trying to teach sinners how not to live like sinners, while sinning in the process.

How can we do it?

A home is a Christian home by grace. Only God can make your home a Christian one. And it is messy business. A lot of sweat and blood went into it … not yours, but Christ’s. And it was worth every drop in order that He might bless you and your family. 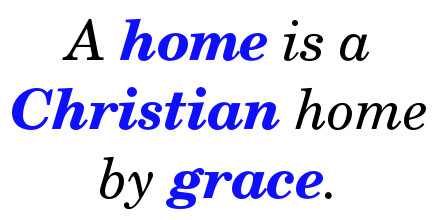 Our text for meditation is taken from Genesis 12:1–3:

Now the Lord had said to Abram: “Get out of your country, From your family And from your father’s house, to a land that I will show you. I will make you a great nation; I will bless you And make your name great; and you shall be a blessing. I will bless those who bless you, And I will curse him who curses you; and in you all the families of the earth shall be blessed.”

Jesus came through Abraham’s family line, as God said, to bless “all the families of the earth.” Now, we would expect such a blessed family line to be rather clean and tidy, wouldn’t we? But consider what sins we find messing up Jesus’ family: polygamy, adultery, incest, prostitution, murder, lies and deceit, rank unbelief, just to name a few. … Talk about baggage!

But was His family so different from ours? Sure, as Christians in families, you would expect us to be neat and tidy, but we are far from it. Even on the best of days, we mess up.

If you are blessed to have a loving family surrounding you and praising you, you recognize that some of that praise is rather generous, and you don’t deserve it. You know about your laziness and selfish decisions. Whether or not you are able to justify them with pious platitudes, they hurt others. You occasionally get reminded of your negligence in your spiritual responsibilities, don’t you? Can you really sweep that under the rug while your family stumbles over it away from God?

And on the worst of days, a “mess” isn’t a strong enough word. What were those names you called him at the top of your lungs in rage and frustration? Did you really honor your parents in your disagreement or was it murder in your heart? Was it really okay just to look, even just that once? Was it really innocent? What about the second time? The third? Are you sure it isn’t hurting anyone? Is what you did really discipline, or were you taking out your anger on your kid? Did God really give you the responsibility to treat your spouse that way? Yes, its okay for you to relax and have one or two, but the three or four others that followed them? Do you even remember what you said and did after that? We won’t even talk about our relationships with our extended families. …

Making a home a Christian home is messy business.

And ironically, it gets even messier when you think you can pick up the pieces by the latest publication of the twelve biblical “rules” to raising a godly family, or a seven-step do-it-yourself relationship-healing program, or money management or good communication seminars.

Unless you have the answer to sin, you can only try to minimize the mess, not clean it up.

Yes, even we Christians have difficult days, messy families, and broken lives. And the devil would like to capitalize on it. “Give up hope,” he says. “You can’t do it. It’s impossible. It’s no use.” But if he can’t get you to give up, then he will tempt you to do the next best thing: hide the mess in a closet somewhere, while continuing to act pious and righteous.

Some families are well practiced at hiding or denying their problems and sins. But Jesus wasn’t.

Some family members have separated or distanced themselves from “problem children.” But Jesus couldn’t. … More precisely, Jesus wouldn’t. He didn’t come to hide their messes, He came to clean them up in His blood, and not only the messes of His family but the messes of all the families of the earth.

You see, the home, even the Old Testament home, is a Christian home by God’s grace. Did you notice in the text who was doing the blessing? God called Abraham out of idolatry by His grace, and said, “I will make you a great nation; I will bless you And make your name great … I will bless … And I will curse. …”

It was by grace that God continued to bless Abraham after his affair with Hagar, falling into his own culture’s version of a “redefinition of marriage” and faithlessly attempting to produce the promised child through surrogacy.

It was by grace that God chose and kept Jacob after all of his sins against his father, his brother, his uncle, his wives, his sons, and his daughter.

It was by grace that God continued to bless King David, the home wrecker, not forsaking him after his affair with Bathsheba and murder of her husband Uriah, all while hiding it under a facade of righteousness.

Time fails us to speak of the many others. The devil tried his damnedest to snuff out the Savior’s line as well as any trust in the promised Messiah and God’s forgiveness. But this only emphasizes the fact: No one earns a place into Jesus’ family. None of us can earn the faith that God gives and sustains in us, making us part of His family.

Dear brothers and sisters in Christ, children of our heavenly Father, the Son of God became the Son of Man in order to bless “all the families of the earth.”

You see, Jesus took your family life very personally, through His own. His life was completely sacrificial, from conception to death. Begotten of His heavenly Father from eternity, and conceived by the Holy Spirit in time, He perfectly submitted to the Father’s will under the Law. Born of the Virgin Mary, and under the guardianship of Joseph, He was obedient (Luke 2:51). Spiritual father to His nation, He taught faithfully, even under persecution. He relentlessly showed love and compassion in His miracles and teaching. A subject to Rome, “He humbled Himself and became obedient to the point of death, even the death of the cross” (Philippians 2:8), though Pilate knew Him to be innocent.

But Jesus knew it had to be this way.

Why? Because forgiveness and salvation (the blessing God promised to Abraham and all families) could not come without blood and death. The wages of sin had to be paid (Romans 6:23). His messy, bloody sacrifice was, and ever remains, the only solution to the mess we have made of our families. On account of Jesus’ death, Dear Brothers and Sisters of Christ, you are forgiven.

The offenses, the negligence, the hiding, the guilt, it’s all forgiven in Christ.

But God’s blessings include still more: Jesus’ perfect life for your broken one. He no longer sees your addictions, but Jesus’ faithful dependence on His Father. God no longer recognizes your abusive language and actions, for Jesus’ tenderness and love. He no longer knows you to be lazy and selfish. But knows only Christ’s selfless sacrifices. He can no longer hold your negligence against you, because Jesus’ perfect diligence is yours.

On the cross, Jesus beheld His mother Mary, who had sinned against Him—as every parent does against his or her child. But He didn’t say, “Look what you have done to Me.” Instead, upon her who had been blessed to bring Him into this world, He bestowed yet another blessing, He placed her into another family, with John as her son (John 19:26).

By His grace, God has put each one of you into a family, specifically into your own family, to be the child, sibling, spouse, parent, grandparent, uncle, aunt or cousin to those people. It is not a place that you have earned, but it is the place He chose for you by grace … for grace, not to earn grace, but to receive it from and give it to those specific people through repentance and forgiveness, through Confession and Absolution.

Making a home a Christian home is messy business, but it’s not your business.

It’s God’s business and He has done it all. He has blessed all the families of the earth, including yours with forgiveness.

Glory be to the Father and to the Son and to the Holy Spirit
as it was in the beginning, is now, and ever shall be forever more.
Soli Deo Gloria

Pastor Samuel Gullixson, of Parkland Lutheran Church in Tacoma, Washington, previously has served as a board member of the Hausvater Project. He founded According to Your Word to produce and distribute quality Lutheran educational and devotional resources for Christian families and churches for the teaching and training of all of God’s children.