The “end” of civil government does not mean anarchy, nor does that term envision any other sort of post-government phase in human history. Rather, “end” has two entirely constructive meanings—one from the Greek contribution to western civilization, and the other from the Roman contribution.

The English term “end” maps to the Greek word “telos” (TEH-lohs) which means “goal” or “purpose.” In the Presbyterian tradition, the Westminster Shorter Catechism uses the term that way in its first inquiry, “What is the chief end [purpose or goal] of man?”

The English term “end” maps additionally to the Latin word “finis” (FEE-nis), which means “border” or “outermost limit,” as in the expression, “to the ends of the earth.”

In reflecting upon the “ends” of civil government, we thus may inquire:

In answering those questions, we will look not so much to the Greeks or the Romans, but rather to the Germans—or, at least, to a particular group of German Lutherans who reflected quite earnestly on these questions in the mid 1500s because, in fact, their very souls depended upon it. Their city, Magdeburg, was under siege by order of their own emperor, and they were wondering whether they had to capitulate and obey an edict to renounce their religion, or whether they properly could resist. As they pondered the end of civil government, they went back to the beginning. Let us, then, also consider:

The answers to the preceding three questions will, in turn, establish the finis for properly identifying the telos of a citizen’s vocation, and likewise for the vocation of a lesser magistrate in relation to a superior magistrate. In other words, we will be able to conclude by answering this question:

What Is the Origin of Civil Government?

On the basis of Romans 13, the Magdeburg Confession of 1550 identified “the magistrate as an ordinance of God” (57). The state was not a creature of man, although a “social contract” to some degree may be involved in forming it. Nor was civil government an invention of the devil, although he might at times pervert it for his own purposes. Rather, government is God’s doing.

“There is no authority except from God,” wrote Paul in Romans 13:1, “and the authorities that exist are appointed by God.” The magistrate is “God’s minister.” (v. 4)

What Is the Telos of Civil Government?

The purpose of civil government is to punish evildoers and protect the innocent. “For rulers are not a terror to good works, but to evil.” (Romans 13:3) As the Magdeburg Confession phrased it, “the legitimately called magistrate … ought to defend pious and honest citizens or subjects, and especially the Church, against injuries by the wicked.” (42)

Just as parents govern their children, so also magistrates govern the state. In fact, Luther had taught in his Large Catechism that civil government derives its authority from the office of fatherhood. The state is the family writ large, each being established by God for protecting the innocent and punishing the evildoer within their respective spheres.

What Is the Finis of Civil Government?

Civil government does not have absolute authority. Rather, its authority has two important limits.

First, civil government must respect the distinction between what Luther termed the Two Kingdoms: the church and civil society. Civil government has jurisdiction over the latter, but not the former. No magistrate may usurp God. No magistrate may exercise authority over the church concerning matters that belong to the church—preaching the gospel, forgiving sins, and the like. Reflecting upon the Two Kingdoms, the Magdeburg Confession affirmed that God has “distinguished one power from another in His Word, so that He has attributed to each of them its own object and task.” (41)

Second, within its own sphere, civil government must use just means toward just ends in carrying out its telos of punishing evildoers and protecting the innocent. The Magdeburg Confession asserts that government policies should “agree with reason and not [be] at variance with the Word [of God].” (41) Universal standards of justice are discernible by “divine law, natural law, and human law.” (47) For example, no one should be accused and condemned without their case first being heard. (48) So, even within the so-called Kingdom of the Left, or secular realm, civil government may not exercise absolute authority; its authority remains subject to divinely established and universally recognized standards of justice.

For a ruler to act unjustly stretches civil government beyond its natural finis, exceeding the boundary of civilization. Thus, the Magdeburg Confession maintained that “when magistrates … lead their charges away from true piety and uprightness, obedience is not owed to them from the word of God. … They become an ordinance of the Devil, which can and ought to be resisted.” (42)

The Magdeburg Confession generally urged obedience by citizens or subjects to their rulers, and by inferior magistrates to their superiors within civil government. However, the Confession also acknowledged circumstances that make it permissible and even mandatory for a citizen to disobey or a lesser magistrate to resist the unjust dictates of a higher magistrate.

“We again affirm from the sure Word of God that when superior magistrates attempt to force … idolotry upon their citizens, to overwhelm the true worship of God and His true worshippers, … by unjust maneuvers with their laws … then pious magistrates are not only able, but even have an obligation to resist them as far as they are able.” (55)

Seeking to preserve as much of God’s established civil order as may still remain, the Magdeburg Confession did not endorse open rebellion, but rather cautious and prudent civil resistance. Articulating a four-level scale of injustice, the Confession calls for as much patience and obedience as possible at the lower levels, until finally, at level four (“more than tyranny”), the magistrate has no other choice than to resist the renegade governor who indeed persecutes God Himself (58–59). 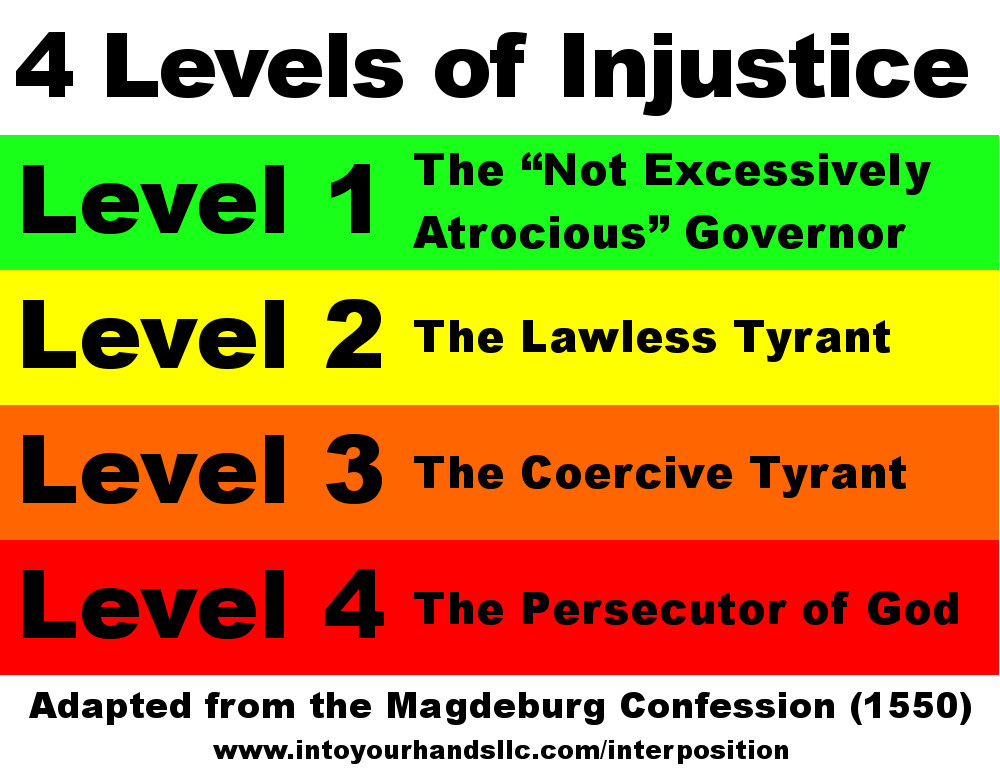 Even when calling for political resistance, the Confession distinguished carefully between the vocations of citizen and magistrate. “But he who resist, it is necessary that he resist in his own station, as a matter of his calling.” (57) Because magistrates of all levels share the Romans 13 telos of protecting the innocent and punishing the guilty, it falls to lesser magistrates to interpose themselves between tyrannical higher magistrates and citizens in order to protect the the latter from the former. Citizens have different roles to play than do the lesser magistrates. “Therefore let each of us do his duty with a brave heart in this most holy resolution to preserve the true religion—teachers by teaching, magistrates by bearing the sword, subjects by promptly obeying their governors when they command pious acts.” (85)

Drawing upon the thinking of Martin Luther, Philip Melancthon, and other prominent Lutherans, the Magdeburg Confession of 1550 provided not only a cogent analysis of a contemporary problem (the Siege of Magdeburg), but also a timeless treatment of the theological principles that properly shape our understanding of civil government—its origin, its telos, and also its finis.