What can I say about my son Torian? 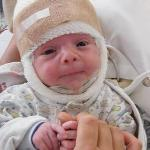 He was born with a very serious health condition. He had countless seizures throughout his life, sometimes as many as three hundred or more in a single day. More often than not, with each seizure he would stop breathing and turn blue. He did this from the day he was born till the day he died, fifteen months later.

Along with this, he was almost completely motionless. He rarely moved his arms or legs, and when he did move them it was usually because he was having another seizure. His eyes did not track and usually it seemed that he was looking right through you. The doctors were unsure if he could see at all. They also told us that he was almost completely deaf in both ears, due to a condition known as auditory neuropathy, and only able to hear things when his brain allowed.

He did not communicate as healthy babies do, not even with facial expressions. He almost never cried, but when he did we were thrilled just to hear him make noise. He did not reach out for things, he never learned to crawl, he couldn't even lift his head from his pillow. He had extreme difficulty swallowing his own saliva and needed to be suctioned with a suction machine on a regular basis, especially when he got sick (which happened fairly frequently).

He could not eat by mouth, but was instead fed through a tube that was inserted through his nose going down into his stomach; when he was first born he did breastfeed semi-successfully for a short time, but that joy was short lived.

What else can I say about my son Torian?

I could tell you that he was loved.

He was loved by me and my wife and each of our children. 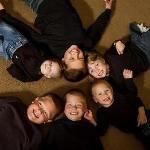 Early on, my wife and I were concerned that eventually our other children would grow resentful of Torian for the time and attention that he would inevitably receive from us; that they would be upset with us and him for the numerous week-long hospitalizations that he received throughout his life. We thought that they would be upset for all the fun things that they missed out on because they were just too difficult to do, or too difficult to go to with all the machines that we would have to bring with us.

But they never did this.

They never showed any resentment whatsoever. They loved him and cared for him as only big brothers and a big sister could do. Every day they would wake up and say good morning to him, squish his chubby little hand or chubby little legs as he would reply back as best he could with a little grunt or sigh. This same noise was often heard from him when my wife would place her cheek up against his cheek. It was a happy sigh, as if to say “Aw Mom,” or “Thanks guys, for loving me.”

From these noises we could tell that he understood more than some thought he knew. But it wasn't until my wife noticed that whenever she gave him a warm bath that the sides of his mouth would slightly turn up. He did this enough in the bath and other pleasureful experiences, such as his coconut oil rub down, that we realized that what he was in fact doing was smiling. We saw him making this little smile countless times throughout his difficult life. As time passed on, we eventually started speaking for him, saying things in what we imagined as Torian’s voice. We would say things like:

Or we sang for him in his voice:

(Deb was always trying to exchange the word “Dad” with “Mom.”)

We called him by many names, such as Buddy Buddy, Little Buddy, Best Buddy, Mr. Cute Stuff, My Sweet Baby, Boopa, Jitter Bug (because his hands and feet would twitch at times), Stinker Winker, and Baby Zorro. (The dialog that Baby Zorro would have with the other children was hilarious.)

The day he died, my wife and I could see his health quickly declining, so we decided to move him from the couch to our bed and lay down with him. Grandpa Bolstad came over early in the morning to see how he was doing and then took our garbage to the dump. While he was gone, the rest of us continued to lay in bed with little Torian, reading from the Bible, singing hymns, and praying with him. His breath became even shallower until he stopped breathing for almost a minute, then took another breath and did not breathe again. He died in my arms as I held his little hand.

I miss him immensely.

We all miss him more than words could describe. He was an absolute joy in our lives.

Some people may wonder how we could love someone who was so difficult to care for and seemingly had so little to offer in return. But what he did have was love, and we could feel it continually. This should come as no surprise to those who have wisdom, for our son, little Torian, was knitted in my wife’s womb by God Himself, and made in His image, just as all children are. The Bible tells us that “God is Love.” If God is love and he made our son in His image, then it should be no surprise why we would feel such love from a boy who could do so little.

How am I able to continue without my son Torian?

Our situation is a sad one, but we know, because the Bible tells us so, that our boy is already enjoying eternal life with Jesus Christ and all believers who have passed before him.

I know this because this is the promise that Jesus gave to all those who put their trust in Him. He was the promised sacrifice to reconcile us to God. God never wanted death and suffering to enter His world.

Death and suffering exists because our first ancestors, Adam and his wife Eve, willingly chose to rebel against God by disobeying the one command that He gave them. They brought death into the world. We bring death into the world by our sins. God, in His love, didn’t destroy humanity then and there, but promised that one day He would send a savior to save us from death and hell.

The man known as Jesus of Nazareth was that savior. He lived in Israel about 2,000 years ago. He was God turned man, for no one other than God could have fulfilled the requirement of living a sinless life. This Jesus would willingly allow Himself to be hung on a tree as our substitute. He suffered death as the final sacrifice for Adam’s sin all those many years ago but then three days later rose from the dead, so that we could one day live in paradise with Him. 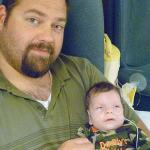 This is the hope that I have for myself and for my family including little Torian. This is the reason I can continue to live my life. For without this hope there is nothing but fear, depression, and in the end eternal suffering for those who choose to ignore God’s free invitation to His home.

One day I know that I will see Torian again, and he will be a happy smiling little boy, running around, talking and laughing and enjoying pleasure unimaginable. I look forward to that day, as does my family, and I hope you do, too.

This article was written on September 23, 2015, a few days after Torian’s death. It originally appeared in Above Rubies magazine and has been republished by the Hausvater Project with permission of the author.

Ethan Bolstad lives in rural Wisconsin, where he and his wife Deb nurture their children daily in the Word of God.