As the Pill Turns 50, a New Generation Seeks to Rediscover Marital Chastity

Celebrated around the world, Mother’s Day is a holiday devoted to honoring motherhood in general and one’s own mother in particular. This Mother’s Day, mothers and grandmothers will receive cards, letters, flowers, candy, telephone calls, and even text messages from their children and grandchildren, who will shower them with love and affection. Mothers, after all, are those who have given us birth or who have adopted us and loved us as one of their own. However, this year’s Mother’s Day takes on a different hue and cast: it coincides with an anniversary devoted not to being a mother. May 9, 2010, you see, is also the fiftieth anniversary of the FDA’s approval of the oral contraceptive commonly known as “the Pill”—now the most frequently prescribed drug worldwide.

[T]his year’s Mother’s Day takes on a different hue and cast: it coincides with an anniversary devoted not to being a mother.

When the U.S. Food and Drug Administration approved the Searle pharmaceutical company’s application to sell Enovid as an oral contraceptive, Margaret Higgens Sanger’s (1879-1966) life-long dream had come true. Birth control advocate, eugenicist, and founder of the Birth Control League of America (now known simply as Planned Parenthood), Sanger had devoted herself tirelessly to relieving women of the burdens of motherhood, which included a quest for a “magic pill” to prevent conception. (Historically, abortion and contraception were both considered “birth control,” a term Sanger herself coined.) Despite 1,900 years of unified Christian (including Lutheran) objection to birth control, and despite various federal and state laws prohibiting the sale of contraceptive medications and devices as well as the dissemination of information about them, Sanger, who titled her periodical The Woman Rebel, was not to be stopped. (The magazine’s masthead declared in bold capital letters: "NO GODS. NO MASTERS." 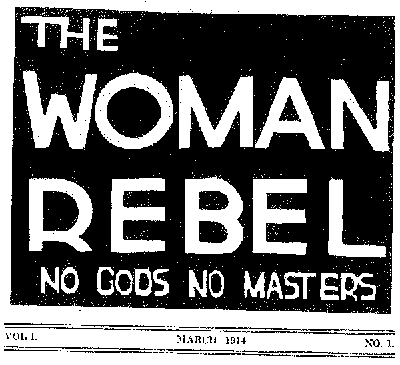 During the first quarter of the twentieth century, conservative Lutherans took a hard line against Sanger—consistent with the longstanding Christian teaching about the blessed vocation of motherhood. To the Missouri Synod’s Theodore Graebner, Sanger was a “she-devil” of the turbulent 1920s who militated against motherhood and God’s Word. Other writers were generally less severe. However, as noted by Alan Graebner in 1969, the united voice of conservative Lutherans against birth control became strangely quiet by the 1930s. Numerous factors contributed to this silence, including the Anglican Church’s acceptance of birth control at its 1930 Lambeth Conference, the Great Depression, two world wars, and women entering the workplace. Above all, however, Graebner cited the declining size of pastors’ families, which indicated that contraception was not unfamiliar in the parsonage. With only whispers from the pulpit, he explained, it was only a matter of time before the laity were hearing nothing at all.

A year before the commercial release of the Pill, Concordia Publishing House issued Planned Parenthood and Birth Control in the Light of Christian Ethics. Written by a Lutheran, the esteemed pastor and seminary professor Alfred M. Rehwinkel, Planned Parenthood was a watershed—not in the sense that the book initiated the use of contraceptives by Lutherans, but in that its publication by a conservative Lutheran publishing house made the book’s conclusions semi-official. The book’s reputation among conservatives no doubt was bolstered by the fact that Rehwinkel also had authored a creationist apologetic entitled The Flood: In the Light of the Bible, Geology, and Archaeology (1951). 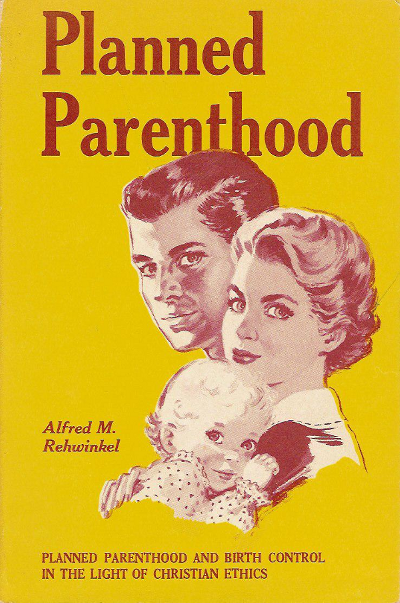 Rehwinkel’s preface to Planned Parenthood, however, offered an unfortunate false dichotomy: either his readers would become so convinced by Rehwinkel’s argument to allow contraception a general role in marriage, or else they would determine that birth control is never permissible at all. Having examined the facts himself, Rehwinkel was confident in throwing down the gauntlet; there simply were no other options.

Unlike the long line of his conservative brethren, Rehwinkel praised Sanger in Planned Parenthood as a “brilliant woman” (p. 30). Here it is helpful to recall that Rehwinkel was a hardworking, Bible-believing, mission-oriented, practical theologian gifted with oratorical skills and a natural flair. Rehwinkel was also married to “Dr. Bessie,” his devoted and slightly older wife, a medical doctor who had mended and cared for Rehwinkel out West when payment for medical services sometimes included a chicken. No doubt Dr. Bessie had some influence over Rehwinkel when it came to drawing conclusions about medical matters, especially those concerning the fairer sex. But when it came to the discussion about contraception, Rehwinkel’s greatest influence was undoubtedly Margaret Sanger, the hardworking, practical, and resolute birth control advocate, a personality not unlike Rehwinkel himself.

Pastors sometimes lament the occasional parishioner who approaches the pastor for his advice about a sensitive ethical matter when the parishioner already has made up his mind anyway. Similarly, Planned Parenthood offered a sort of retroactive permission for a practice that had become increasingly common among its Lutheran audience: contraception not only by clergy, but also by the laity. At the time, what was lacking was a theological justification for such a decision that already had been made. The justification, of course, for conservative Lutherans had to be based on the Word of God. However, it also had to be understandable and immanently practical. In short, it had to be the best American conservative religious pragmatism had to offer. Not shy of sticking his neck out for a cause he believed in, and fortified with numerous conversations with medical men and women about the difficulties of motherhood, Rehwinkel was ready to oblige.

Rehwinkel’s approach to Scripture, to which he and others had acquiesced in the decades prior to writing Planned Parenthood, is nowadays commonplace among conservative Christians.

Rehwinkel’s approach to Scripture, to which he and others had acquiesced in the decades prior to writing Planned Parenthood, is nowadays commonplace among conservative Christians. It is therefore instructive. First, define the moral issue. Second, consult the Scriptures. Third, if the Scriptures do not specifically mention the issue, or they do not specifically prohibit a given practice, then the conclusion: the Christian is free to engage. Savvy believers will recognize that this sort of biblical interpretation has been used by politicians in order to support clear moral wrongs. Recall that President Bill Clinton, a Baptist, suggested, “Nowhere in those Ten Commandments will you find anything about homosexuality.” Of course, the Bible explicitly condemns homosexuality in numerous places, and even says that God’s creation shows that same-sex relations go against nature. But for Clinton, that wasn’t the point. The point was that where he chose to look in the Bible, the prohibitions were not there.

In order to build a theological framework that would support contraception, Rehwinkel had to clear away some brush. First, and although not mentioned in his book, Rehwinkel ignored a large chunk of historic Lutheran teaching about the chief purpose of marriage: having children. Luther, Chemnitz, Gerhard, and numerous other orthodox theologians found that contraception violated the first, fourth, fifth, and sixth commandments. True, Rehwinkel occasionally quoted Luther, Melancthon, and the Lutheran Confessions in Planned Parenthood, but he was selective, not dealing with the Lutheran writings that specifically address God’s gift of procreation. Second, Rehwinkel found that the Bible (or perhaps its index?) was “strangely silent” about birth control. Third, whereas Lutherans had always agreed with St. Paul that God’s creation reveals His will that ought not to be violated (Romans 1:26-27, 2:14-15), Rehwinkel disagreed. Fourth, Rehwinkel had to confront what some theologians had called “the seat of doctrine” regarding the prohibition against contraception: the Onan incident in Genesis 38:9-10. In vogue with popular exegesis of the time, Rehwinkel suggested that Onan had perished not for “spilling his seed” but for “his total disobedience.” This innovative twentieth-century interpretation contradicted the long-standing consensus among Old Testament scholars, including Keil and Delitzsch from the prior century and Rehwinkel’s own contemporary in the Evangelical Lutheran Synod, George O. Lillegard, whose recent sermon series on Genesis referred to Onan’s misdeed as “essentially the same sin as those commit today who practice what is called ‘birth control’” (From Eden to Egypt; Genesis: The Book of Beginnings [Milwaukee: Northwestern Publishing House, 1956], 313). Finally, there was Genesis 1:28. When God said, “Be fruitful and multiply,” Rehwinkel suggested that God was promising offspring rather than obligating Adam and Eve to beget them—again, a false dichotomy.

Having provided an alternative moral framework, Rehwinkel was then able to offer a different understanding of marriage that, in turn, influenced a different understanding of Christian motherhood. This understanding was perfect for the post-war era: apparently biblical, immanently practical, and easy-to-understand. Marriage was not primarily for procreation; it was first and foremost “intended for companionship and mutual aid.” Though pregnancy, gestation, giving birth, and child-rearing were not completely optional, Rehwinkel found them to be something to be regulated, controlled, and planned. To a conservative Lutheran of the day, it seemed appropriate for people to live their lives according to the facts, drawn either from the Bible or, if the Bible seemed sufficiently silent, from the latest science. Perhaps unsure of his own thesis, however, Rehwinkel fallaciously accused those who would disagree with him of arguing that sexual pleasure was not a legitimate function of the marital act. Again, a false dichotomy—this time between pleasure and procreation—forced him to choose one over the other, rather than embracing the full truth.

Instead of looking to the Bible as a rule book either permitting some actions or prohibiting others, [a new generation of confessional Lutherans] are looking for Christ, who offers them lives they can live abundantly. This holistic approach ... is the really old Lutheran teaching that Rehwinkel chose to side-step in Planned Parenthood.

Which brings us back to the Pill. Younger confessional Lutherans today are reexamining some of the teachings and practices of twentieth-century Lutherans in light of today’s problems and are coming away dissatisfied. No-fault divorce, abortion on demand, rampant pornography, same-sex “marriage,” embryonic stem cell research, and a host of other chastity-related issues are causing them to trace the doctrinal formulations they have inherited back to their roots. Like Rehwinkel, they want to navigate contemporary issues while being faithful to the Scriptures. However, they are approaching the Bible differently. Instead of looking to the Bible as a rule book either permitting some actions or prohibiting others, they are looking for Christ, who offers them lives they can live abundantly. This holistic approach, which focuses primarily not on rules to live by but rather on who we are and are becoming as new creations in Christ, is the really old Lutheran teaching that Rehwinkel chose to side-step in Planned Parenthood. To meet today’s challenges, younger Lutherans want—and need—something richer than Rehwinkel offered.

And this is a good thing. Despite Margaret Sanger’s success with the “Pill,” motherhood and mothers are still valued. It’s just that for a growing number of us children, we would like to value—and love—them even more.

Pastor Robert C. Baker serves as a senior editor of Bible study materials for Concordia Publishing House in St. Louis. He currently is pursuing an M.S. in Health Care Ethics at Creighton University.